Do you have a good story about the adventures of the pilgrim monkey? If you’re passionate about Asia, you couldn’t miss this story. This Buddhist novel, written by Wu Cheng’En in the late 17th century, quickly became popular throughout Asia. But then, why is this story still one of the favorite tales of Asians today? What does the story of this book tell us? Together, let’s discover this literary work, monument of Asian culture!

The story of the pilgrim monkey

In ancestral China, a monkey is being made from a rock. The first part of the book tells us about the adventures of this celestial being with disproportionate ambitions. After finding a place to live for himself and his people, the monkey king goes on many adventures. His primary goal? Make sure that his companions, his friends, his people never know death. We follow him on his adventures in search of power.

He will first go to retrieve the pillar that holds the oceans and make it his weapon of choice. Then we can follow him in his training to master the 72 transformations. To end the first part, it is to the kingdom of the Emperor of Jade that ends his journey. In his quest for power, he ransacks paradise after being duped by the many deities who manage the place.

Punished to remain 500 years locked in the mountain of the 5 peaks by Buddha, he is freed by a monk who has the mission to bring the sacred scriptures of India to translate them into Chinese. At this moment the book begins the second part which will be a long initiation journey for our monkey. Indeed, the monk missioned by Guan Yin surrounds himself, on the advice of the latter, with four companions who will help him in his quest. Over the course of the chapters, friendships are created and the brotherhood between the monk and the monkey king becomes very strong. Fighting monsters, freeing the kingdoms of its ghosts, annihilating the nest of a spider demon who fed on travelers, pilgrims also take advantage of their trip to India to rid the earth of many evil forces.

The epic of the pilgrim monkey is above all an initiation journey for 5 characters. If the story revolves mainly around the monkey and the monk, the other protagonists also have their importance.

So we find our monkey king, Sun Wukong, in his quest for immortality. After destroying paradise and spending 500 years under a mountain, he goes on a long journey that will teach him that immortality lies in reincarnation.

The monk San Zang is missioned by Guan Yin to bring back the sacred texts of India as we recalled earlier.

Then there are two other key characters: Zh-B-Jiè and Sh-Ha Shàng. These two other companions are also evil spirits who seek the blessing of heaven to attain reincarnation. On the one hand, we have the spirit of the pig, Zh-B-Jiè, who attracted the young girls to devour them before the monkey corrected him. And a sea creature, Sh-Hey Shàng, who will become the group’s baggage bearer.

Finally, the dragon prince living in the rivers of China will also join the troop. He terrorized the surrounding villagers and, to redeem himself, agreed to be turned into a horse to carry the monk San Zang on his journey.

Why is it the novel still so popular in Asia?

Considered one of the masterpieces of literature of the Ming period, the book has quickly become a must-see throughout Asia over the centuries. The monk Xuan Zang, who lived in the 7th century to reclaim the Holy Scriptures, was given exceptional companions. That’s the secret of this book. If the monk’s journey remains a small feat, romanticling his journey by adding a little magic has won the hearts of readers. We are still talking about the person who was able to bring back the texts translated in China, he needed a legend to match him!

From China, texts have spread throughout Asia. In Vietnam, it is not uncommon (or even systematic) to come across a Wukong statuette in each pagoda. But the novel has managed to go through the centuries.

Indeed, we no longer count film adaptations. The most notable is Stephen Chow’s 1994 film. The monkey king also appears in many video games. But it is in the manga that its appearance remains the most significant. Anyone born in the 80s remembers Dragon Ball. The report? Its hero, the young Son Goku is a free adaptation of the monkey king. Son Goku is the name of Sun Wukong in Japanese. From the original pilgrimage, Akira Toriyama has adapted his story to make the king of the monkeys live an adventure in its own right.

Finally, a modern version of the book was created as a Korean drama in 2017. In Hwayugi, Oh Gong, released by young Sam Jang, helps her in her battle with ghosts. As in any drama, the story quickly turns to romance.

Thanks to the modern era, the pilgrim monkey has acquired immortality. From the book to the various adaptations, our hero is now known all over the world and can never be dethroned again! 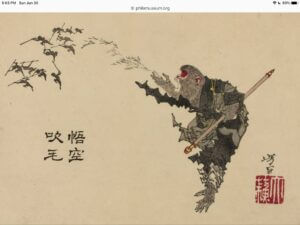