A world-famous construction, almost visible from space, the Great Wall of China continues to fascinate many people. Erected mainly during the Ming period, the wall still stands today, centuries after its construction. More than 6,000 kilometres long, it is now a tourist attraction. How did it come into being? What are its secrets? How do you get to this place? All the information is in this article.

From its construction to today

China has always built walls to demarcate its territory and protect itself from neighbouring invaders. Indeed, before the Qin period, many fortifications were built by different clans. What will become China is a set of territories where walls rise more than 10 metres above the ground.

It was not until 221 BC that the peoples of China united under the Qin dynasty. Emperor Qin Shi Huang then asked his troops to prepare the construction of a wall on the banks of the Yellow River. But it was not until the Han era and the reign of Emperor Wudi that the project of the Chinese wall began. The existing portions of the walls are connected to each other and the wall is extended to the west of China.

During the Ming Dynasty, the wall will be completely replaced. Indeed, the wall, which had been made of terracotta until then, will be replaced by stone. More solid, more durable, the wall becomes a real bulwark against the outside opponent. This barricade then allows China to complete its unification and to develop without fear of any attacks.

The Great Wall of China Army

One of the greatest discoveries related to the Great Wall is its terracotta army. Discovered in 1974 by local farmers, this faction of more than 8,000 soldiers has long questioned the archaeologists who have studied it. This immense space served as the tomb of the first emperor: Qin Shi Huang. Buried in a replica of his palace and surrounded by an army that was supposed to protect him, the emperor still lies in the centre of the necropolis in a tomb that is still unopened to this day.

Indeed, with the discovery of the army, many statuettes have seen their colours deteriorate rapidly on contact with the air. To open the emperor’s tomb would be tantamount to destroying what it contains. In all, more than 8,000 soldiers, 130 chariots, 520 horses and 150 mounted horses have watched over the site for more than 2,000 years.

How to get there?

Travelling on the Great Wall of China is a tourist attraction that attracts several million visitors every year. Everything is done to facilitate your travel to the place of visit. For example, from Beijing, you will be able to visit one of the many sites on the wall. Although Badaling and Mutianyu are very close to the city (about 70 kilometers) Simatai remains an interesting place to visit.

Slightly further away from Beijing, this place is less known by tourists. Renovated in 2011, the place has kept all its traditional character. First of all, you will have to travel more than two hours to Jinshangling. Then, a 3-hour hike will be necessary to reach Simatai. Here you can enjoy the various hot springs surrounding the wall and a faithful reconstruction of a city from the Ming period. 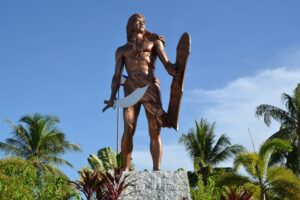